With the market continuing to hit new highs, my clients frequently ask if I believe that we are now in a “new bull market.” First, I tell them that is is actually an old bull market, because our portfolios been primarily long the market since our months-to-years time frame, the Bull/Bear indicator, told us to get back into the market on May, 15, 2009. This indicator has served us well because it told us to get out of the market back on January 11, 2008, and on October 13, 2000, which allowed investors to miss the market meltdowns of 2001-2001, and the financial collapse of 2009.

Long time followers of FBIAS ™ Fact Based Investment Allocation Strategy portfolios know that predictions are futile, and those who think they can predict the market moves are foolish. We design actively managed risk-adjusted portfolios to profit in bull markets, and protect profits in bull markets. These risk managed approaches make sense to most investors because they know that we stick to our core beliefs about the market:

These portfolios are based on the market laws of supply and demand, they’re built on academic facts, not theories or some puffed up market hypothesis. With that in mind, let’s answer the question: Are we in a new bull market?

Is this a new bull market or what?

We could be, but history says that it’s doubtful. This is more likely an “or what.” Here’s why: 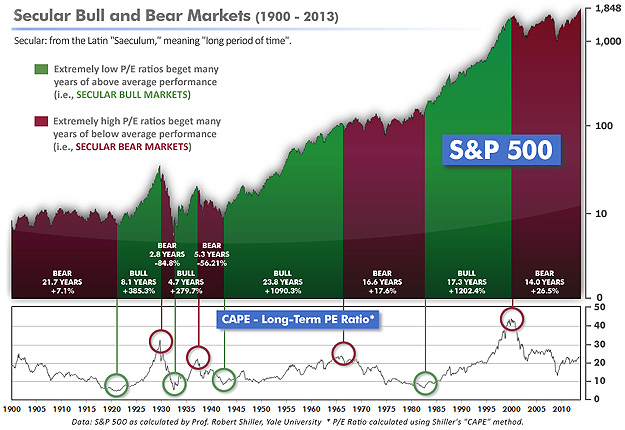 Where are we now? Well, as the chart shows, we are in the 14th year of a longer term secular bear market as defined by the CAPE–Cyclically Adjusted Price-Earnings ratio that was developed by Dr. Robert Shiller, professor of economics at Yale University. The current secular bear market began in 2000 when the P/E ratio peaked at around 44. The job or a secular bear market is to burn off outrageously high P/E ratios over one or two decades until the P/E ratio arrives back at a single-digit level, from which another secular bull market can emerge.

If history is a guide, then we’re not done with the secular bear market. The Shiller P/E finished the week at 24, and is approximately at the level that it reached at the pre-crash high in October 2007. Even though P/E’s are substantially lower than their crazy peak in 2000, they are nontheless at the high end of the normal historical range and leave little room for expansion. This means that the stock market is unlikely to make gains greater than the corporate profit growth percentage, if that.

In fact, since 1881, the average annual returns for all rolling ten year periods that began with a CAPE at this level have been just 3%!

Above-average returns (3%) are much more likely to come from the active management of portfolios than from a passive buy-and-hold approach. Although  mania could come along and cause P/E’s to shoot upward from current levels (such as happened in the late 1920’s and the late 1990’s), in the absence of such a mania, buy-and-hold investors will likely have a long wait until the arrival of returns typical of a Secular Bull Market.

So you are bearish right now?

For the last three years, the US Bull-Bear indicator has pushed further into Bull territory than other global asset classes, replecting the higher strength of the US market relative to the rest of the world. The current cyclical bull has taken the US to new all-time highs, but most of the world’s major indices have barely matched 2011’s highs, let alone approached the 2007 levels.

Be smart, and have a plan in place to protect your profits.