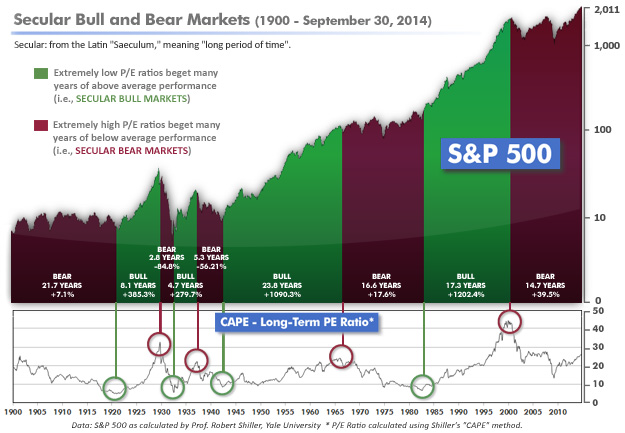 Even if we are in a new Secular Bull Market, market history says future returns are likely to be modest at best.   The Shiller P/E is at 26.7, up a tenth from the prior week’s 26.6, and approximately at the level reached at the pre-crash high in October, 2007.  Even though P/E’s are substantially lower than their crazy peak in 2000, they are nonetheless at the high end of the normal historical range and leave little if any room for expansion.  This means that the stock market is unlikely to make gains greater than corporate profit growth percentage, if that.  (note: all P/E references are to the Shiller P/E values, sometimes called PE10 or CAPE, which are calculated so as to remove shorter-term fluctuations; see robertshiller.com for details). 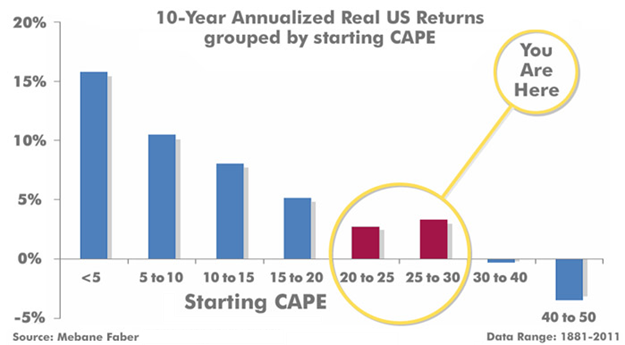 The “big picture” is the months-to-years timeframe – the timeframe in which Cyclical Bulls and Bears operate.  The US Bull-Bear Indicator (see graph below) is at 58.82, up from the prior week’s 56.7, and continues in cyclical Bull territory.  The current Cyclical Bull has taken the US and some of Europe to new all-time highs, but many of the world’s major indices have yet to top 2007’s levels.  The most widely followed international indexes, the Morgan Stanley EAFE Developed International index and the Morgan Stanley Emerging Markets Index, are both still below their 2007 peaks. 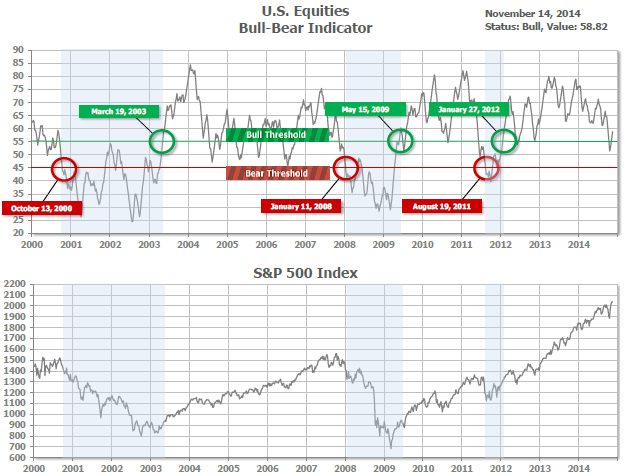 The intermediate (weeks to months) indicator (see graph below) is Positive and ended the week at25, up from the prior week’s 21.  Separately, the quarter-by-quarter indicator – based on domestic and international stock trend status at the start of each quarter – gave a positive indication on the first day of October for the prospects for the fourth quarter of 2014.

It was a dull week for markets, with much less movement than was the case just a few weeks ago when volatility was high and so was fear.  The S&P 500 index closed between 2038.25 and 2039.82 each of the 5 trading days of the week, just a 1.7 point range.  For the week, the S&P and Dow managed a +0.4% gain, while the MidCap and SmallCap indices were flat on the week, and the Nasdaq 100 index rose +1.6% – by far the best performance of any US index.  Canada’s TSX gained +1.0%, buoyed by a gain in gold and by the newly-revived Keystone XL pipeline bills now in Congress.  Developed International Markets gained an average of +0.5%, while Emerging International Markets rose +0.5%.  China led the major internationals with +3.0% rise, and Brazil brought up the rear with a loss of -4.2%.

It was an extremely light week for economic data in the U.S. with the only report of note, October retail sales, up a better than expected +0.3%.  The most important continuing economic story is the rapid decline in the price of oil.  Crude prices are down 30% since mid-June.  U.S. motorists are paying an average of $2.92 a gallon, according to the Lundberg Survey (for the two weeks ended Nov. 7, so a further decline is probable for the week just ended), or a savings of about $52 billion for U.S. consumers.  The Department of Labor reported that employees are quitting their jobs at the fastest rate since 2008, which, counterintuitively, is good news as it means the quitting employees are confident that they can promptly find another, presumably better, job.

One of the most vexing issues in the US economy has been the stubborn refusal of hourly earnings to rise more than the cost of living, thereby leaving real wages stagnant.  This chart, from fivethirtyeight.com, shows that 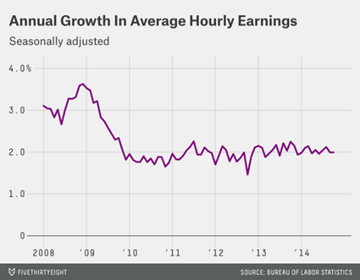 annual wage growth has been stuck in the 2% range since 2009 – as has annual inflation.  That’s because employers have been able to fill jobs readily, with no need to raise wages to attract and retain their employees.

However, that may change in the not too distant future.  The unemployment rate for the “least employable” – those who did not graduate from high school – has finally come down to the level at which employers may at last be required to offer higher wages as an inducement to attract applicants even at this low rung on the employment ladder.  This Fed chart shows that the unemployment rate for this group is now back to the 8% level, last seen in 2008. 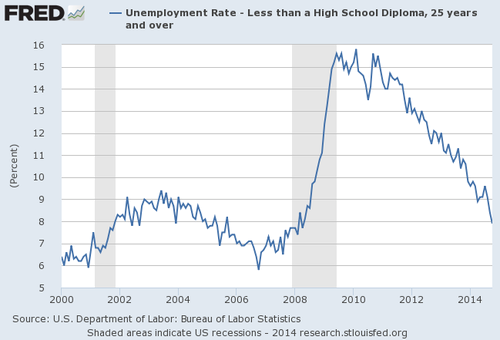 Canadian factory sales advanced in September, the eighth gain in nine months, mostly due to an increase in aerospace sales.  Statistics Canada reported that manufacturing sales rose +2.1 percent to C$53.0 billion.  The upside to the recent depreciation for the Canadian dollar versus the US dollar is that exports can grow smartly, particularly of sophisticated manufactured products such as those in the aerospace category.  Canadians are rolling their eyes at the continuing folly of US politics regarding the Keystone XL Pipeline.  Suddenly, previously-obstructive Democrats in the US Senate are falling over themselves to get a bill passed in support of the project, all in a desperate attempt to save Senator Mary Landrieu’s seat.  She has made support of the project a cornerstone of her re-election campaign in the energy industry friendly state of Louisiana, and now that she is behind in the polls for a runoff vote, fellow Democrats are belatedly trying to come to her rescue.  The President, however, is not on board with this effort, and may well veto any legislation that reaches his desk.

China and the US announced an agreement on greenhouse gas emissions, whereby the US will continue to cut its emissions and China will…do nothing.  The only thing China agreed to do was to use its 2030 emissions output as the benchmark against which to measure any subsequent reductions.  Perversely, this seemingly gives China an incentive to increase emissions with abandon until 2030 in order to establish a high level from which subsequent reductions can be measured – and more easily achieved. 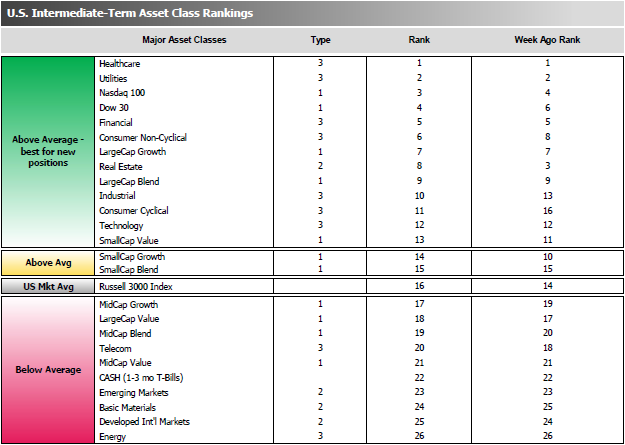 The average ranking of Defensive SHUT sectors was unchanged at 7.3, while the average ranking of Offensive DIME sectors rose to 17.8 from the prior week’s 20. Institutional investors remain cautious, and the Defensive SHUT group continues to rank substantially higher than the Offensive DIME group ranking.   This caution is reflected in the fact that institutional investors are underperforming market averages this year, having been cautious and defensively positioned with lots of cash while market averages have gone on to new highs – leaving them behind.