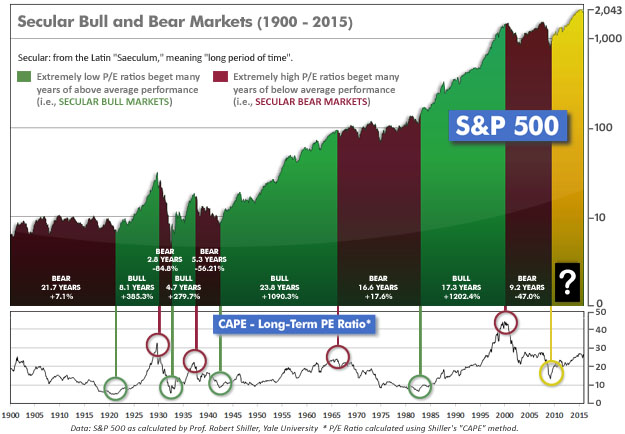 Even if we are in a new Secular Bull Market, market history says future returns are likely to be modest at best.   The CAPE is at 25.71, down slightly from the prior week’s 25.90, after having earlier reached the level also reached at the pre-crash high in October, 2007.  Since 1881, the average annual return for all ten year periods that began with a CAPE around this level have been just 3%/yr (see graph below). 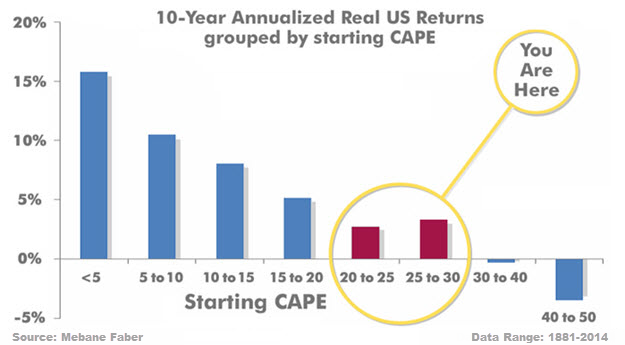 The “big picture” is the months-to-years timeframe – the timeframe in which Cyclical Bulls and Bears operate.  The U.S. Bull-Bear Indicator (see graph below) turned negative on January 15th, and remains in Cyclical Bear territory at 49.03 down from the prior week’s 50.87. 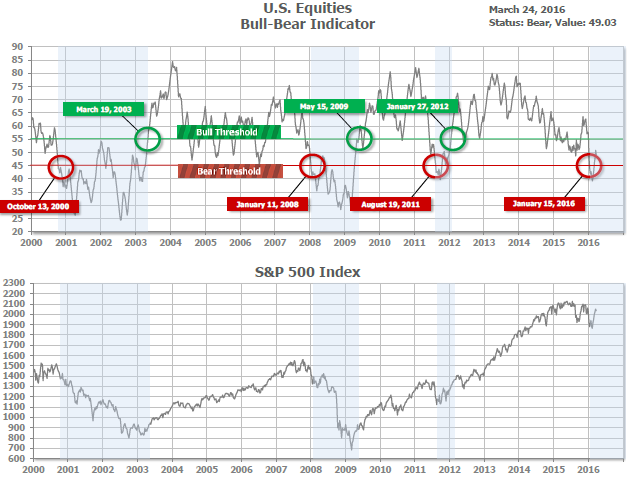 The intermediate (weeks to months) indicator (see graph below) turned positive on January 26th.  The indicator ended the week at 36 (the maximum value possible), unchanged from the prior week.  Separately, the quarter-by-quarter indicator – based on domestic and international stock trend status at the start of each quarter – gave a negative indication on the first day of January for the prospects for the first quarter of 2016.

In commodities, there was weakness across the board as the precious metals, industrial metals, and energy groups were all in the red.  The recent rally in crude oil took a break after data released on Wednesday showed U.S. stockpiles of oil were again reaching record levels.  Also pressuring commodities was renewed strength in the U.S. dollar against most other currencies.  Gold gave up -$39.30 an ounce to end the week at $1,216.70, a loss of 3%.  Silver declined -3.95% to close at $15.20.  The industrial metal copper lost -2.1%.  Oil was unable to manage a 6th straight week of gains and ended the week down -3.74% to $39.59 a barrel.

In U.S. economic news, a broad and timely indicator of the health of the job market improved significantly this week.  At the beginning of the year, there was a serious slowdown in the annual growth rate of income and employment tax withholdings.  That suggested that the job market was on a much weaker footing than the headline numbers portrayed.  This past week withheld tax grew at a +3.4% gain over the past four weeks following a +2% rise the previous four.  Some analysts prefer the tax collections data because they aren’t seasonally adjusted or revised, even though economists focus much more on the monthly Non-Farm Payroll jobs report, which is prone to big subsequent revisions.

In housing, existing home sales slipped -7.1% in February to a seasonally-adjusted 5.08 million annual rate, according to the National Association of Realtors.  The level of sales, while up +2.2% from this time last year, was the second weakest in a year.  Sales fell in all four regions of the country.  The median existing home price was $210,800, up +4.4% from a year before.  First-time buyers fell to 30% from 32%, while investors purchased 18% of homes.

New-home sales rose to an annual rate of 512,000 last month according to the Commerce Department, signaling a steady pace for housing activity and beating economists’ estimates by 2000.  The median sales price in February was $301,400 up 2.6% versus a year earlier.  The number of homes for sale was the highest since October 2009.

U.S. orders for durable goods fell -2.8% in February, matching expectations, but the details of the report showed underlying weakness.  Excluding transportation, orders fell -1%, which was worse than expected and the sharpest drop in a year.  Core capital goods orders (excluding defense and aircraft) fell -1.8%, taken as a bad sign for business investment in new plant capacity.

On Monday, both Dennis Lockhart, president of the Federal Reserve Bank of Atlanta, and San Francisco Fed President John Williams asserted that the United States was experiencing growth and emerging signs of inflation – two stated prerequisites for more rate hikes – and therefore, they said, a rate hike is possible at either of the Fed’s next two policy meetings.

In international economic news, Toronto Dominion’s (TD) Economics’ Quarterly Economic Forecast for Canada stated that the Canadian economy has been through a bit of a rough ride over the past year, but 2016 will likely see the country return to growth.  Real GDP is forecast to grow +1.9% in 2016 and +2.0% in 2017.  This is the first time TD has increased its growth forecast in a year.

Germany’s economic advisors revised down their 2016 growth forecast, saying global economic uncertainties will weigh down trade.  The advisors said they expect Europe’s largest economy to grow by just +1.5% this year, down 0.1% from the previous forecast.

In France, the budget deficit narrowed last year, but unemployment hit a new record high, spotlighting the patchy recovery of the Eurozone’s second-largest economy.  French Finance Minister Michel Sapin said the deficit was 3.5% of gross domestic product in 2015, better than the 3.8% expected, and he expects growth to accelerate this year to +1.5% from +1.2% last year.  But the continuing problem with high unemployment weighs on the economy.  The number of French job seekers rose an additional +1% last month, keeping the stubbornly high unemployment rate at 10% or more of the workforce.

In China, Premier Li Keqiang said Beijing will reduce the tax burden on Chinese companies to spur dynamism and help the economy’s desired shift toward consumption and services and away from their over-dependence on manufacturing.  In a speech this past week, Mr. Li stated that the government will push ahead with tax cuts, particularly focusing on helping promising service industries, including those involved in research and development.  He said such tax cuts will amount to 500 billion yuan ($76.8 billion) this year.

Finally, frequent references are made in this weekly report to Markit’s Purchasing Managers Index (PMI) reports.  The reason is that the PMI reports are quite highly correlated to – and frequently lead – the changes in health of the economies being reported on.

Here is a chart showing the very high correlation between PMI levels and US Gross Domestic Product (GDP) quarter-over-quarter changes.  The upshot is that the PMI reports are very much worth the attention we pay them – and also that current PMI levels may portend worsening US GDP: 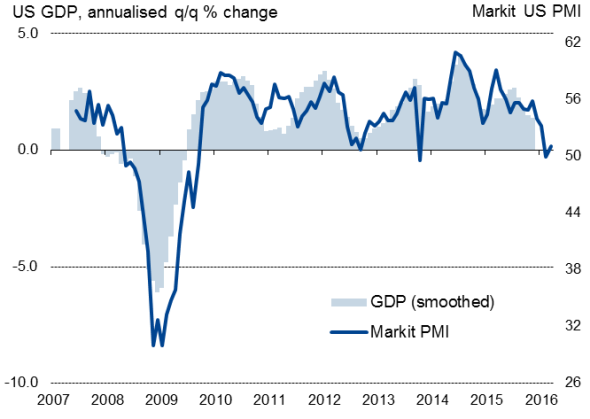 Chris Williamson, Chief Economist for Markit, writes that the U.S. economy is going through its worst growth spell for three and a half years.  Both the national manufacturing and services PMI indexes had fallen to the stagnation level of 50 in February and improved only slightly in March to 51.1, according to Markit’s early “flash” readings.  Williamson notes that the improved 51.1 reading was still “the third-lowest reading seen since the global financial crisis.”

The ranking relationship (shown in Fig. 5) between the defensive SHUT sectors (“S”=Staples [a.k.a. consumer non-cyclical], “H”=Healthcare, “U”=Utilities and “T”=Telecom) and the offensive DIME sectors (“D”=Discretionary [a.k.a. Consumer Cyclical], “I”=Industrial, “M”=Materials, “E”=Energy), is one way to gauge institutional investor sentiment in the market.  The average ranking of Defensive SHUT sectors fell to 12.3 from the prior week’s 11, while the average ranking of Offensive DIME sectors fell to 9.8 from the prior week’s 9.3.  The Offensive DIME sectors are now ranked higher than and have taken the lead from the Defensive SHUT sectors.   Note: these are “ranks”, not “scores”, so smaller numbers are higher ranks and larger numbers are lower ranks. 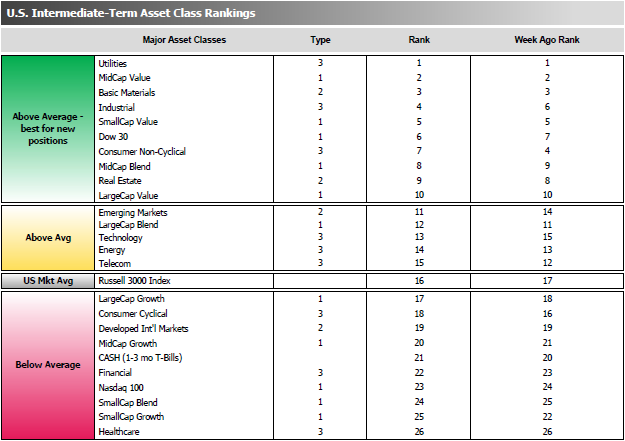