In the “decades” timeframe, the current Secular Bull Market could turn out to be among the shorter Secular Bull markets on record. This is because of the long-term valuation of the market which, after only eight years, has reached the upper end of its normal range.

The long-term valuation of the market is commonly measured by the Cyclically Adjusted Price to Earnings ratio, or “CAPE”, which smooths out shorter-term earnings swings in order to get a longer-term assessment of market valuation. A CAPE level of 30 is considered to be the upper end of the normal range, and the level at which further PE-ratio expansion comes to a halt (meaning that increases in market prices only occur in a general response to earnings increases, instead of rising “just because”).

Of course, a “mania” could come along and drive prices higher – much higher, even – and for some years to come. Manias occur when valuation no longer seems to matter, and caution is thrown completely to the wind as buyers rush in to buy first and ask questions later. Two manias in the last century – the 1920’s “Roaring Twenties” and the 1990’s “Tech Bubble” – show that the sky is the limit when common sense is overcome by a blind desire to buy. But, of course, the piper must be paid and the following decade or two are spent in Secular Bear Markets, giving most or all of the mania gains back.

The “big picture” is the months-to-years timeframe – the timeframe in which Cyclical Bulls and Bears operate. The U.S. Bull-Bear Indicator (see Fig. 3) is in Cyclical Bull territory at 76.83, down from the prior week’s 78.47. 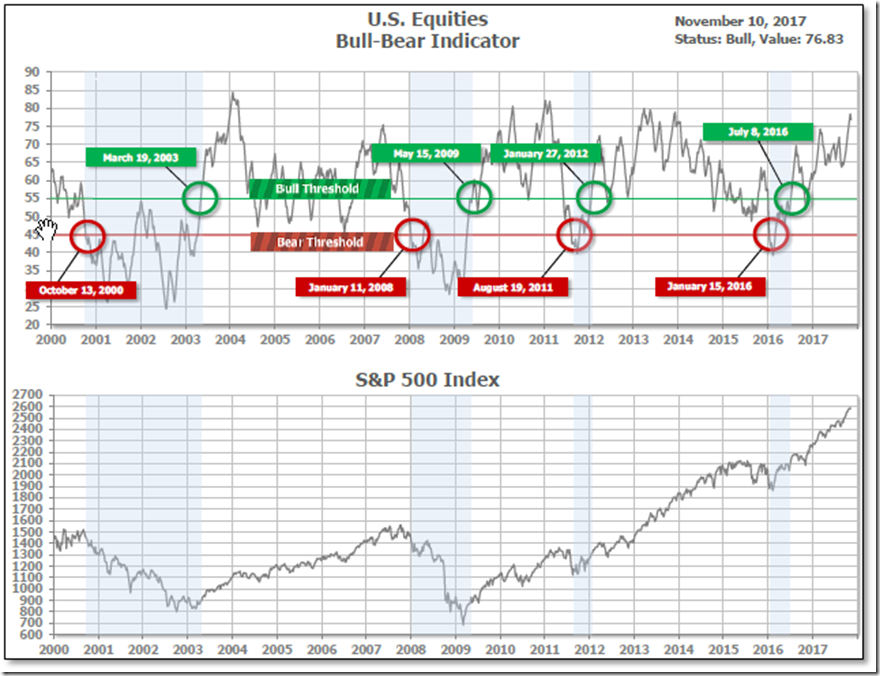 In the intermediate and Shorter-term picture:

The Shorter-term (weeks to months) Indicator (see Fig. 4) turned negative on November 9th. The indicator ended the week at 20, down sharply from the prior week’s 26. Separately, the Intermediate-term Quarterly Trend Indicator – based on domestic and international stock trend status at the start of each quarter – was positive entering October, indicating positive prospects for equities in the fourth quarter of 2017.

In the Secular (years to decades) timeframe (Figs. 1 & 2), unless a mania comes along the long-term valuation of the market is simply too high to sustain rip-roaring multi-year returns. The Bull-Bear Indicator (months to years) is positive (Fig. 3), indicating a potential uptrend in the longer timeframe. In the intermediate timeframe, the Quarterly Trend Indicator (months to quarters) is positive for Q4, but the shorter (weeks to months) timeframe (Fig. 4) is negative. Therefore, with internal disagreement expressed by two of three indicators being positive but one being negative, the U.S. equity markets are rated as Neutral.

Commodities: Precious metals rebounded following a string of weekly losses. Gold rose 0.39% to close at $1274.20 an ounce, while Silver gained 0.22% ending the week at $16.87. Oil had its fifth consecutive week of gains with West Texas Intermediate crude oil ending the week at $56.74 a barrel, a gain of almost 2%. Copper, used by some analysts as a barometer of world economic health for its variety of industrial uses, ended the week down -1.33%.

U.S. Economic News: The Labor Department reported that initial claims for new unemployment benefits rose by 10,000 to 239,000 last week. Economists had expected an increase of only 231,000. The less-volatile four week moving average of claims fell by 1,250 to 231,250, its lowest level since March of 1973. The level of claims indicates a job market strong enough to keep the unemployment rate declining. Some analysts are predicting an unemployment rate below 4% in the near future. Continuing claims, the number of people already receiving unemployment benefits, rose by 17,000 to 1.9 million. That number is reported with a one week delay.

Eight years after the end of the Great Recession, the labor market continues to strengthen. The Labor Department reported the number of job openings rose to 6.09 million in September, near record highs. There have been over 6 million job openings each month for the last four months. In the details of the report, 5.27 million people were hired, a slight retreat from the 5.42 million hired the month before, while 5.24 million people lost their jobs. The quits rate among private-sector employees, closely watched by officials at the Federal Reserve because it is assumed that people only leave their jobs for better higher paying ones, remained unchanged at 2.4%.

Borrowing by U.S. consumers surged the largest amount in almost a year in September, according to the Federal Reserve. Total consumer credit increased $20.8 billion in September to a record seasonally adjusted $3.79 trillion—an annual growth rate of 6.6%. Economists had expected a gain of only $17.4 billion. For the third quarter, consumer credit increased at a 5.5% annual rate. In the details, all categories of borrowing showed strength. Non-revolving credit, which covers loans for education and vehicles, rose at an annual rate of 6.3% in September, a 3% increase over August and the biggest gain since January. Revolving credit, which is predominantly made up of credit-card charges, increased at an annual rate of 7.7% in September, an increase of 1% over August.

Sentiment among the nation’s consumers slipped slightly this month, but remained near the highest levels of the year. In its survey of 500 consumers’ attitudes on future economic prospects, the University of Michigan reported its consumer sentiment index fell 2.9 points to 97.8. Richard Curtin, chief economist for the survey, attributed the decline to “widespread losses across views of current and future economic conditions.” Curtin said that while wage gains and the overall number of consumers have been trending positively, “these favorable trends were countered by a slight rise in year-ahead inflation expectations and a growing consensus that interest rates will increase during the year ahead.” Economists had expected a reading of 100.7.

International Economic News: In Canada, inflation continues to fall short of the Bank of Canada’s 2% target, but Governor Stephen Poloz said not to worry, fundamental factors are continuing to drive price growth. In a speech this week, Poloz said the fundamental drivers of supply and demand, as well as short-term factors, can explain the lack of significant upward movement in prices. Over the first half of the year, inflation slowed and remained in the lower half of the Bank of Canada’s target range even as the economy grew quickly. However, Poloz noted that a number of one-time factors helped keep inflation in check, among them lower food costs and a reduction in electricity prices.

Across the Atlantic, U.K. industry had its strongest month so far this year in September, according to the latest reading from the Office for National Statistics (ONS). According to the report, strength in the manufacturing sector may help counteract a slowdown in consumer spending and a plunge in construction outlays. The report also gives some credence to the Bank of England’s decision to raise interest rates for the first time in more than 10 years. ING economist James Smith said, “Stronger global growth and the effect of the weaker pound seem to be finally showing through in the U.K. manufacturing numbers.” On a negative note, the ONS also reported a 1.6% monthly drop in construction, along with British shops recording their worst October sales in a decade.

On Europe’s mainland, French President Emmanuel Macron reaffirmed his commitment to strengthening political and business ties between the UAE and France as he addressed delegates at the UAE-France Business Forum in Dubai. During his statement, Macron highlighted the shared values of culture, civilization, and the economy between the two countries. He emphasized the role of business and education in creating “a new world for the young generation, based on respect, tolerance, and reason.” He noted that the UAE and France were making great strides in promoting innovation and building “smart” cities.

In Germany, a report from a government panel of independent economic advisers is predicting a healthy growth rate of 2% in Europe’s largest economy, followed by acceleration to 2.2% growth in 2018. Chairman Cristoph Schmidt said that “Germany is in a robust upswing and production capabilities are in overload.” However, the report continued, that growth combined with low interest rates threatens to bring about bubbles in sectors of the economy and general inflation. Of note in the report, the council accused the European Central Bank of being “too opaque” and called on it to end its mass bond buying program sooner than it intends to.

The Italian economic recovery that began in 2014 is finally taking off, but economists warn that the upturn is likely to remain short-lived since few of Italy’s many underlying structural problems have been fixed. Economy Minister Pier Carlo Padoan estimated this week that growth bounced back to 0.5% in the third quarter, a 0.2% increase from the second. “The recovery is consolidating and GDP growth is getting more robust,” he said. However, on a negative note, Italy has an overall jobless rate of 11.1% and a youth unemployment rate of 35.7%, both among the highest in the EU.

In Asia, at the Asia-Pacific Economic Cooperation summit in Da Nang, Vietnam Chinese President Xi Jinping spoke of the value of international “cooperation” and economic “openness”. Xi’s speech followed an address from U.S. President Donald Trump, where he likewise called for economic openness, but he spoke harshly against countries that he felt committed “chronic trade abuses.” The Chinese President added that his country will continue to open up and reform. The Chinese leader told the gathering of political and business leaders, “In pursuing economic globalization, we should make it more open, more inclusive, more balanced, more equitable and more beneficial to all.”

In Japan, a recent survey showed that the average financial assets of Japanese households rose 6.8% from the same time last year, predominantly due to an improving job market and a 25% rise in Japanese stock prices. The annual survey by the Central Council for Financial Services Information (CCFSI) suggested that Prime Minister Shinzo Abe’s reflationist “Abenomics” policies appear to be working. However, uncertainty over the stability of Japan’s social welfare system given the rapidly increasing elderly population prevented households from purchasing riskier investments such as equities. Over 54% of Japanese households’ financial assets were held in savings and bank deposits, with only 8.9% in stocks, according to the survey.

Finally: The last of the world’s major regional indices has finally gotten back to its 2007 highs. The MSCI Asia-Pacific Index includes stock markets in 15 Pacific region countries, including Australia, China, Hong Kong, India, Indonesia, Japan, Korea, Malaysia, New Zealand, Pakistan, the Philippines, Singapore, Sri Lanka, Taiwan and Thailand. The breaching of the 2007 highs happened a mere 56 months after the U.S. achieved the same feat in 2013.

Along with the markets now in a seemingly globally synchronized uptrend, economic conditions have similarly improved. Jeffrey Saut, chief investment strategist at Raymond James, released a research note highlighting the fact that global growth is expected to reach 3.6% next year—the best since the Great Recession. Further, a report from Deutsche Bank Securities says this should result in the lowest-ever number of countries in recession next year. 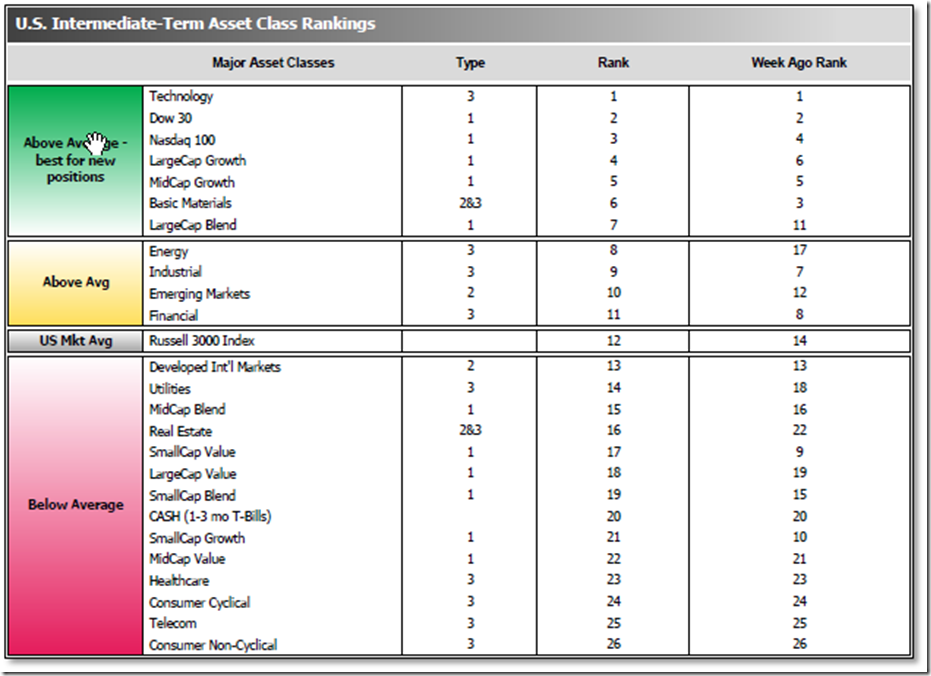 If you have any questions about the FBIAS™ Fact-Based Investment Allocation Strategy portfolios, feel free to give your Anthony Capital, LLC advisor a call at 303-734-7178 or by scheduling a private virtual meeting/conference call. We work with clients from all over the country and would be happy to help.

You can also open up an online account by clicking HERE at our preferred custodian, Folio Institutional, LLC.